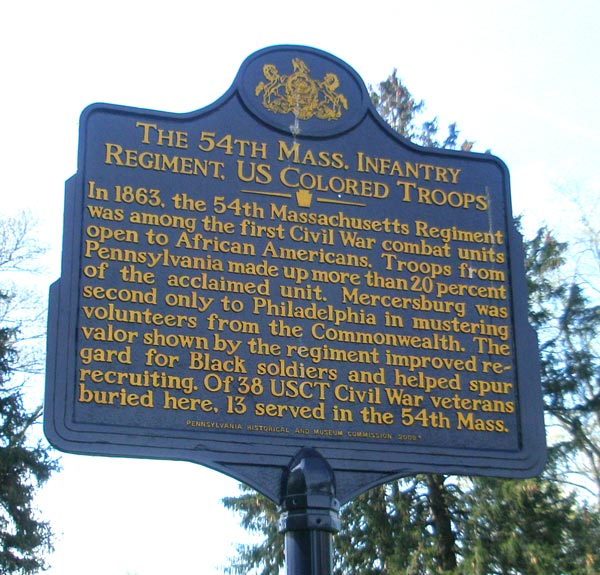 Since the Mercersburg area is close to the Maryland-Pennsylvania border, it saw, especially after the passage of the Fugitive Slave Act in 1850, many underground railroad activities.  Because of the nature of these activities most accounts are of oral tradition, not documented.  In our area many of the escaping slaves walked on a path through Blairs Valley that led into Pennsylvania and were guided on their path by various means.  One of these was observing on which side of the trees the moss lay.  Some of these fugitives settled in what became known as Little Africa just southwest of Mercersburg.  Others traveled on the continuation of this path to Cove Gap, another early destination, settled there, and formed another community. The Mercersburg Journal noted in 1863 the death in Cove Gap of a hundred and three year old lady, who had been a slave in Berkeley County, Virginia, of the brother-in-law of George Washington.  This lady, who remembered having seen Washington and who frequently commented upon “his manly bearing,” and her husband came to Cove Gap after they had received their freedom in 1830.  Still others continued on this path to what is now route 30.  Many of our  present local African American families came to this area on this well-trodden path and made their homes here.

One of the men who assisted many runaway slaves, it has been asserted, was Acheson Ritchey, who lived on a farm outside of Mercersburg and who gave the fugitives food if he deemed it wise to keep them or sent them to the next station, if he deemed they were in danger.  The Ritchey family took into its home a local eleven year old African American girl who had the task of caring for the babies and young children of the people coming through on the underground railroad. It has also been asserted that when John Brown was in Chambersburg, he sent an emissary to Acheson Ritchey to obtain the latter’s opinion about a proposed raid upon the arsenal at Harpers Ferry but that Mr. Ritchey discouraged the plan.

Another person who aided slaves in their search for freedom was Jacob Bezan, an African American who lived on West California Street.  Bezan was a small man in stature, but his son, George, was large.  When fugitives were approaching, Jacob kept watch for them while George guarded the house.  Upon one occasion, when the father and son exchanged responsibilities, the slaves seeking sanctuary were fearful because they had anticipated seeing a small man. 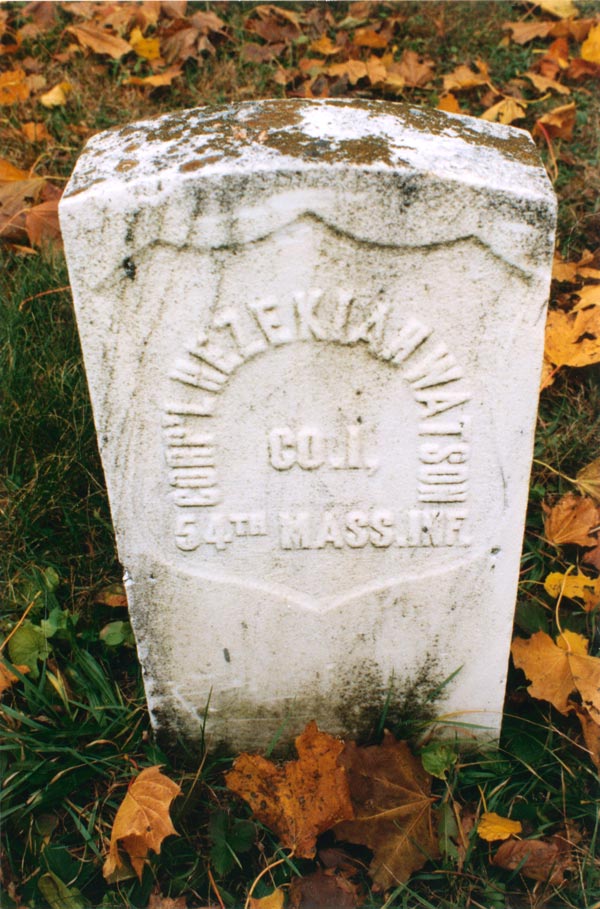 Tombstone of Corp. Hezekiah Watson,
a Member of the Massachusetts 54th
- Courtesy of Mercersburg Historical
Society

But, tragically, other fugitive slaves fell into the hands of slave-catchers, who had a profitable business of selling the fugitives back into slavery.   Some slaves, however, managed to hide.  At times slaves hid in a cave near Cove Gap. Upon one occasion a child hid in a tree near what is now Mountain Road.  Sometimes, though, the slave-catchers and those who helped them were caught off-guard and died as a result of their actions.  In 1837 three slaves who had run away from their masters in Virginia arrived in Mercersburg.  After they had been taken to what they thought was a friendly house, the owner called the local constable.  When the constable arrived, one of the slaves with a scythe killed the constable.  In another incident those sympathetic to runaway slaves had a young man pose as a runaway slave and let himself be decoyed into the presence of a slave-catcher who always  required slaves to walk behind him. The young man, assuming the life of a slave, followed the slave-catcher and struck him with a rifle.

Long after the abolition of slavery, people, both African American and white, were well aware of it. Well into the twentieth century frequently the death records of those who had been born into slavery noted their occupation with the word slave.