Seth Dickey and The Village of Dickey 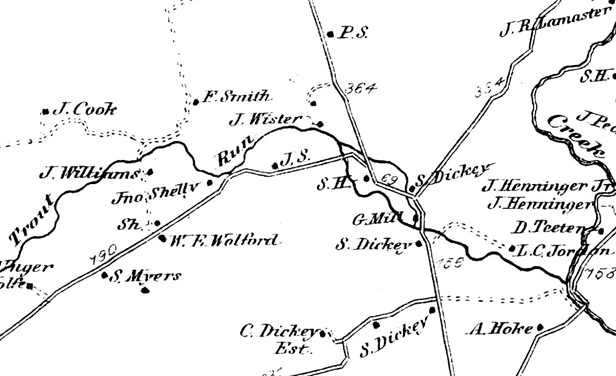 “Seth Dickey was born in 1841, which made him, by modern measure and statistics, prime resource material for the Civil War. With the death of his father, James, Jr. in 1855, Seth inherited much of the Dickey Family wealth and land along Dickey’s Run. The early records of the Upper West Conococheague Presbyterian Church compiled by the Rev. John King show many entries, baptisms, marriages of the family of the original James Dickey who was as Scots-Irish as the ancient ‘Londonderry Air.’

After the Civil War, Seth married Annie Smith descended from Squire William Smith, the founder of Mercersburg. There were a son and daughter born to the couple both whom died from childhood illnesses. Annie Smith Dickey died in 1879 and in 1905 Seth remarried. His second wife, Mary Patterson Dickey, was the object of many romantic poems written by her husband in his later life.” (from The Late Seth Dickey of Mercersburg by Charles J. Stoner)

Joan M. Semper says that Seth lived the latter part of his life in Mercersburg, PA next to the residence of Professor John L. Finafrock and Seth and Elizabeth had at least one son. Buried Mercersburg (Fairview) Cemetery.

“This is the farm a short distance north of the mill, where stands a stone house, at the forks in the road, built by my father. My father and grandfather were blacksmiths, made edge tools, grain sickles, buckles and files. I married Elizabeth Anderson and had six children, Mary Jane (mother of Nancy Hurst Irwin Stewart) Adeline, James, Rush, Calvin and Seth. My mother, Rebecca, died August 27, 1821.” (WikiTree by Gary Dickey)

“When I visited Uncle Seth in 1882, we the foregoing. Some were still owned by tenants. The family homestead had and almost everything in it, including our ancestors. The mill also had been still in fair shape, could have been private letter written by my father’s town, and which letter was stated in this letter that he finds since his great grandfather arrived December 1849. Visited the various farms referred in by Uncle Seth and farmed on shares, been burned down years before, leaving many samples of the work of burned, but the water power was made available by a little cleaning up of the race and repairs to the banks. But the power developed was so small that it could not be made to pay for any modern use.” (WikiTree by Gary Dickey)

“The farms were all bought of the Indians, under the William Penn treaties signed by Charles II, March 4, 1861 and tradition has it that the payment, for all my ancestor and the Indian could walk around before dark was a couple of cowbells filled with salt, some beads and whiskey.

The Dickeys seem never to have been a closely knit family. None of my relatives had any information as to outside the immediate family of my grandfather, James Dickey III. And even some of these “had not seen heard of for years.” Aunt Adeline, then Mrs. Oberle, and her son James Chambers, she married John Chambers of Chambersburg, and had only the one child, who lost his health and never was well enough to engage in any business.

All ancestors seem to have been interested in the old Presbyterian Church at Mercersburg. Uncle Seth built an addition to it for the Sunday School. There are plenty of gossip stories of the old times. They struck me as unusually fishy, lacked anything better than kitchen gossip. These people seem to have attended strictly to their own business.” (WikiTree by Gary Dickey.)

“The farms were all bought of the Indians, under the William Penn treaties signed by Charles II, March 4, 1861 and tradition has it that the payment, for all my ancestor and the Indian could walk around before dark was a couple of cowbells filled with salt, some beads and whiskey.” (WikiTree by Gary Dickey.)

Dave Hawbaker owns what is left of the Dickey Farm property that bordered the Farm of John Shelly. His Grandfather, Daniel Hawbaker, purchased the Dickey Farm property. Daniel was married to Ada Beatrice Hege, daughter of Joseph Pittman Hege. Joseph was a brother of H.B. Hege. John Shelly is the Great – Great Grandfather of Terry Martin-Minnich. Terry’s Grandmother was Myrtle Alice Shelly, granddaughter of John Shelly. Terry and Ron Martin-Minnich own part of what was the Shelly Farm property and live on the land visible in the Dickey 1866 Land Draft. Terry’s Grandfather was H.B. Hege. H.B. Hege bought the Shelly Farm and left the property to his daughters. Myrtle Hege Dicker and Martha Hege Martin kept their parcels and built on the farm land in 1956 and 1958, respectively. Sam Mellott owns was is left of the rest of the Shelly Farm, including the barn and farm house.

“The 1868 atlas shows a millrace and grist mill along Trout (Buck or Dickey's) Run on the west side of Fort Loudon Road (Now PA Rte. 75), just south of that road’s intersection with Orchard Road. “S. Dickey” is shown at two houses nearby, indicating the now vanished mill was Dickey’s Mill. Tax records from 1843 note that James Dickey owned a grist mill in the township for this location, Peters Township.

T.B. Wood wrote that what was likely the first and largest cast iron shaft used in local mills was hauled to Dickey’s Mill by a six-horse Conestoga wagon. The iron shaft, cast in 1857 by the Chambersburg company Wood and Housom, was a foot in diameter and fourteen feet long. It replaced a 30-inch octagonal wooden shaft.

In the first part of 1858, an advertisement continually appeared in the Mercersburg Weekly Journal in which John McLaughlin wrote, “I will sell flour at Dickey’s Mill at $4.50 per barrel, to Cash paying customers and warrant it a good article. As the accompanying advertisement shows, W.D. Newman was operating the mill in early 1873. Later that year a newspaper account reported that “Seth Dickey’s mill burned in 1873. Insurance covered $3,000 of the damage incurred by the fire.” (Mills Book article by Dan Guzy.)

Some Accounts about Village of Dickey

The Methodist Episcopal Church of Mercersburg held a camp meeting in the meadow. - 1856 Pocket book found near Dickey’s Schoolhouse with $10 – 1858

There was no station, just a platform, which was right across from my present carport on the bank with a maple tree. My dad always wanted to rebuild it just as he remembered the structure. He said that you could take the train to Marion for a nickel and then transfer to the main line of the Cumberland Valley RR going north and south. I have a train time-table from the 1890s which shows about half a dozen trains from Richmond Furnace to Marion, the so-called “South Penn Branch of the CVRR”.

The stop at my house was called “PARNOB” on the time-table from the mountain knob visible from the stop. “Dickey’s Station” was the name of the stop where the tracks crossed Dickey’s Road. The switch near the crossing of the Mercersburg Road (416) at the present Hoffeditz farm near the Conococheague Creek bridge was called Mercersburg Junction, because the train had to change direction to back up to the dead end at Mercersburg, where there was no turn around.

The Dickey’s schoolhouse where my dad and his siblings went to elementary grades was right along the run in HECKMAN’s meadow, where there is now a huge sycamore tree. You can still see the concrete foundation of the outhouse, even from Route 75. The road used to pass closer to the run, about where the electric poles are now, so the road went right past the schoolhouse. It is upstream from HECKMAN’s limestone spring house between their spring house and Dickey’s Road.

There was also a mill located about where the big farmhouse (just sold) is now right across the run from my house. A mill race passed under Route 75 at right angles from a dam which was upstream where the run makes a 90 degree bend right where the still intact stone wall was built by the railroad. That is right down the hill from my farm buildings. The wall and some remnants of the dam are very visible today. There was enough fall from the dam to the mill to turn the mill wheel. Then, the tail race returned the water back to the run downstream.

A similar setup was at Cove Gap for the mill located there. The race is still very prominent. My mother used to walk along the race from her grandparents’ house, (David William UNGER, the distiller, whose father Aaron Josephus UNGER built that large white frame house near the distillery, now owned by MILLER’s) to the mill in downtown Foltz as a young girl. Certainly, Dan Guzy knows about that mill, I hope. But the mill across from my house was much older and lesser known, I believe.

I have some more stories and a beautiful poem written about the “Noisy Brook” by an ancestor who lived on our farm in the 1890s as a tenant of the Dickeys in the house on the hill along the farm lane where there is now a small white house today. That was the site of the original farm house which burned down. The house where the mill was located is much newer and probably was built on the foundation of the old mill, just as the small white house was built on the foundation of the old farm house in the 1950s by my dad.

Back to Persons of Interest