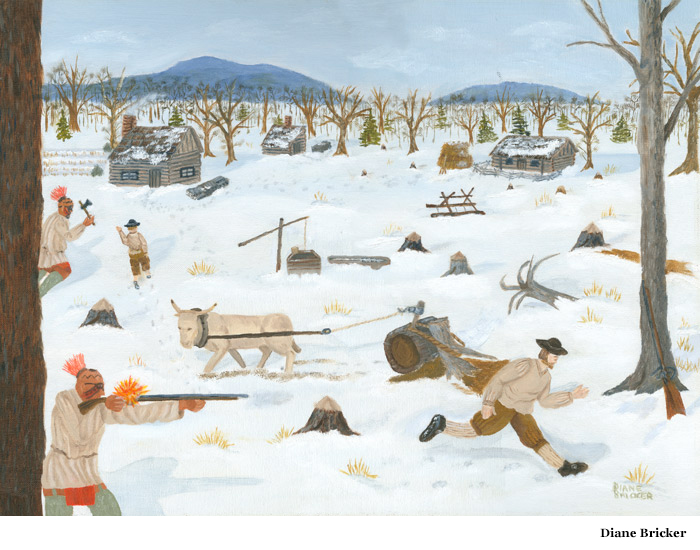 On September 1, 1736, Clement, Peter and their cousin, Heinrich Studebaker, arrived in Philadelphia to start a new life in a new land of opportunities. They were the patriarchs of a very important and influential family in America, the Studebakers. In the early 1750s, the three Studebakers settled on the frontier with other anti -war German Baptist Church immigrants along the temporary line between Maryland and Pennsylvania. Clement settled in present day Adams County, Pennsylvania, near Gettysburg, Peter in Washington County, Maryland, at Williamsport and Heinrich in Montgomery Township a half a mile south of Welsh Run.

In the fall of 1755, four months after the defeat of General Braddock's army in Western Pennsylvania, the full fury of the French and Indian War erupted in our area with the massacre and capture of many of the settlers west of the Tuscarora Mountains. The settlers in our area either fled to the east or organized themselves around private local forts for protection. Feeling safe Heinrich Studebaker did not flee but stayed at his farm, since he was less than two miles from the fort of his brother-in-law, Allan Kellough, south of the temporary line. In mid-February 1756, Delaware King Shingas and War Chief, Captain Jacobs, led a war party of forty­five braves from their main village at Kittanning on the Allegheny River south to attack the settlers along the Potomac River at present day Hancock and Williamsport, Maryland. On the first of March, the war party sav­agely descended on the settlers, killing and capturing many. They burned their cabins, barns and granaries and slaughtered their livestock before turning north to retreat through our area.

On March 3, 1756, Heinrich Studebaker and his oldest son, Joseph, were pulling stumps in preparation for the spring planting when the Indian war party attacked. Heinrich was fatally shot while running for his rifle, and Joseph was grabbed by one of the savages as he raced towards the cabin. The war party descended on the cabin, forced their way in and captured Mrs. Studebaker and three of her children. The Indians quickly gathered up their prisoners and any items they wanted before making a hasty retreat. They did not have time to bum the cabin or kill the livestock. They captured Mrs. Studebaker and the children, twelve-year old Joseph, ten-year old Phillip, five-year old Elizabeth and a two-year old child. Heinrich's oldest daughter, Susannah, had gone to visit her uncle, Allan Kellough, and was not home at the time of the attack.

The Indians always made a hasty retreat after an attack, mostly traveling for twenty four hours straight. Mrs. Studebaker, who was pregnant, could not keep up. She and the baby were separated from the other children and were killed and scalped. This was devastating to the children, especially five year old Elizabeth. Joseph did his best to calm her for fear that the Indians might tum on her and kill her too. The children were taken to Kittanning where they were adopted into the Delaware Nation. The children were together at Kittanning when Colonel John Armstrong's forces attacked the Indian village in early September of 1756. Armstrong's men burned the village and killed many Indians, including Captain Jacobs. The Studebaker chil dren were forced to hide in the cornfields during the attack until they were ferried across the Allegheny River to safety. After the attack, the children were split up and taken deep into Indian territory in present day Ohio, where they lived with the Indians until they were forced to return to their white families at the end of Pontiac's War in 1764.

Philip Studebaker and fifteen other prisoners were returned to their white families at a peace conference in Lancaster, Pennsylvania, in 1762. This was a gesture of good faith on the part of the Indians. This was difficult for the Indians to do. These captives were adopted by the Indians, and it was the same as giving up their own children. Joseph and Elizabeth Studebaker were forced to return to their white family in the fall of 1764 at the end of War. Elizabeth was unable to re-adapt, and she ran off to live with her Indian family, here she remained the rest of her life. Joseph had difficulty adapting and was always known as Injun Joe. He married a white woman, and he and his brother, Philip, and their families homesteaded in western Pennsylvania and Ohio after the Revolutionary War.

The two Studebaker brothers who started the wagon works at Southbend, Indiana, in 1852 were descendent of Clement Studebaker. The Studebakers sold thousands of wagons to the Union Army during the Civil War. These wagons were considered by many to be the best and most dependable built at that time. In the early 1900s, they began building the Studebaker cars.

Back to Montgomery Township/Welsh Run