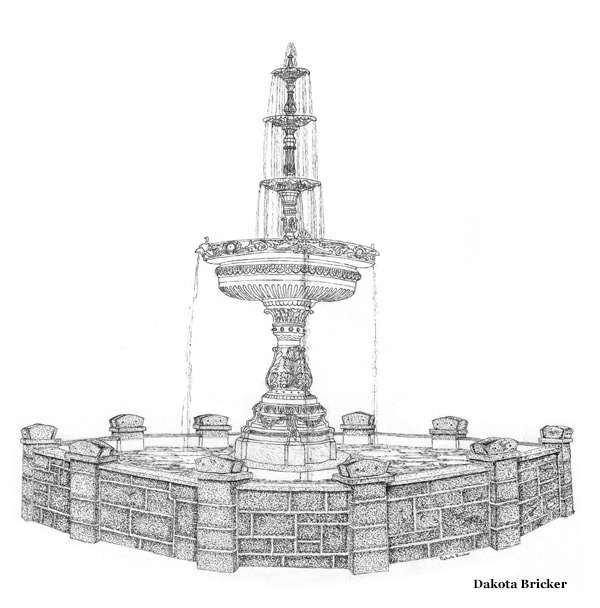 The fountain that stood in the Square of Mercersburg from 1916 until 1959 is a much-loved icon of the town.  In 1915 the Borough of Mercersburg improved the Square, then often referred to as the Diamond, with paving and installation of electric lights.  The Mercersburg Journal reported the installation of eight lamp posts with three bulbs each enclosed in a white glass globe.   In addition at that time it was suggested that a grass plot remain in the center of the Square.  In August of that year the Woman’s Club, now the Women’s Club, at a special meeting upon the motion of Miss Sadie Parker passed a resolution that “the Club make an effort to solicit for a fountain” as a fountain would be more beautiful and long-lasting than a grass plot and looked at several designs of fountains.  The women, led by a committee of Mrs. H. L. Waidlich, Miss Parker, and Miss Anna Fallon, began raising money for the proposed fountain and by September had raised $381.55, noted that more people were subscribing to the project, and directed the fountain committee now of six members with the addition of Mrs. Virginia Fendrick, Miss Agnew, and Miss Nancy Rupley “to secure a catalogue and select a fountain.”

The following article appeared in the Mercersburg Journal on June 9, 1916:  “The fountain recently placed in the Public Square of Mercersburg is certainly a thing of beauty and adds much to the attractiveness of the beautiful mountain town - the town beautiful for situation.

“It was at great expense this fountain was placed, not alone in actual money, but at the sacrifice of time, energy, and patience by those having the matter in charge.  It is to be hoped that the fountain will be enjoyed by all and that young and old will feel sufficient civic pride to do individually what can be done to take the best care of it.

“This is a very beautiful world and Mercersburg a beautiful portion of it; may her people do all that is possible to make it more beautiful.”

From May of that year until its removal in 1959 the Woman’s Club today known as the Women’s Club planted and cared for flowers in the stone urns on the sides of the fountain.

After the removal of the fountain from the Square it was lost for many years until Mr. and Mrs. Robert Grove in 1991 purchased it from an antique collector in Windber, Pennsylvania, had it restored, and in September 1993 had it placed in a lot on North Fayette Street that the Groves gave to the Borough of Mercersburg.  Dedicated and given to the Borough in September 1994, the fountain is once again delighting residents and visitors alike.