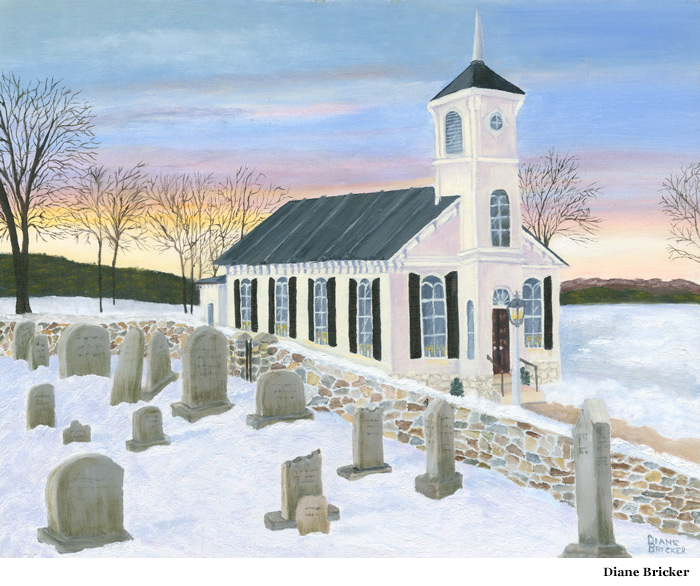 Local settlers founded a Presbyterian Church at the Welsh settlement in 1741.  They built a crude log meetinghouse on a ninety-two acre parcel of land adjoining the south side of the West Branch of the Conococheague Creek between present day Welsh Run and Upton.  The meetinghouse was built on a rocky bluff on the western edge of the property next to a spring.  The building was approximately 25 x 30 square feet with a dirt floor and no fireplace or means to heat the building.  The building was fitted with crude benches, a barrel shaped pulpit, and a clerk’s box.  Any windows were paned with oilcloth.  The church was known as the Lower West Conococheague Presbyterian Church.  This meetinghouse served the local congregation for almost twenty years until the late 1750s when the Conococheague Settlement was greatly disrupted by Indian attacks during the French and Indian War.  During this war most of the settlers fled the area, the congregation was dissolved, and Indians burned the meetinghouse.

After the Indian wars the congregation was reorganized, and in the late 1760s a new crude meetinghouse was built near the present church on land owned by Robert Smith.  In September 1771 the congregation sold the 92-acre meetinghouse lands to John Ulrich for 290 pounds and 7 shillings ($1,200.00).  John Ulrich built a two-story stone gristmill on the property.  The mill was later known as the Welsh Run Mills and burned down in 1905.

The congregation used the money from the sale of the land to built its first true church building on three acres of land owned by Robert Smith in 1772 and 1773.  This church was a beautiful, well-constructed log building later covered with wood siding.  This church was of the ancient model with high pulpit, elaborately ornamented sounding board, and seats having backs as high as the shoulders.  The Reverend Thomas McPherrin became pastor on August 17, 1774.  He continued in this capacity until October 1799 when he resigned because of poor health.  Reverend McPherrin died in 1802 and is buried in the church cemetery.

On August 13, 1803, the Reverend Robert Kennedy was installed as pastor of the East and West Conococheague Presbyterian Churches at Greencastle and Welsh Run respectively.  The Welsh Run Church was poorly served after Mr. Kennedy left, and most of its members joined other churches.  Mr. Kennedy returned to his farm near Welsh Run in the spring of 1825 and resumed charge of the Welsh Run Church, which at that time had only six members.  He served the Welsh Run Church until his death on October 31, 1843.  At the time of his  death the church had almost seventy members.  Reverend Kennedy is buried in the church cemetery.

The church was vacant for twelve years after the death of Mr. Kennedy, and the congregation dwindled away.  From 1855 to 1870 pastors from the Williamsport, Maryland, and Mercersburg Presbyterian Churches served the Welsh Run congregation.  During this period of struggle the church building fell into disrepair.  Mr. Elias D. Kennedy, a lawyer and successful businessman of Philadelphia and the only surviving child of the Reverend Robert Kennedy, agreed to build at his own expense upon the foundation of the old church a new building.  The old church was torn down, and the present building was built in the summer of 1871. The new structure was dedicated on September 30, 1871, and the name of the church was changed to the Robert Kennedy Memorial Presbyterian Church in honor of Mr. Kennedy‘s father. In 1873 the Reverend Joseph Fleming became the first pastor of the new church. The congregation increased dramatically after the new church had been built. Reverend Fleming died in 1892 and is buried in the church cemetery.

The stone wall around the cemetery dates to the late 1700s.  The stone wall was capped with  slate roof until the 1940s.  Miss Sophia Fleming, daughter of the Reverend Joseph Fleming, had installed a beautiful Tiffany window in the chancel in memory of her father in 1934, and the congregation built a parsonage next to the church.

In 1875 the congregation built an academy  across the road from the church on land donated by Jacob Angle.  Reverend Fleming, a good classical scholar, taught at the academy, which was a college preparatory school.  The school was known as the Kennedy Academy and was in use until the 1930s.  In the later years it was primarily a girls’ school.

The present organ was installed in 1916.  The piano dates back to the early twentieth century.  Carbon gas lights were installed in the new church and were replaced in 1925 when electricity came to Welsh Run. The congregation remained steady throughout the first half of the twentieth century, but the lack of space to add modern facilities to the church sealed its fate.  The congregation dwindled in the 1950s and was disbanded in 1962.  The church was placed in trust with the Carlisle Presbytery and was used occasionally for the next decade.  The church building slowly deteriorated.

In 1995 the formation of the Conococheague Institute, a local history organization, promoted the restoration of the old church.  The church committee had the church restored, repainted, and the cemetery walls re-pointed.  Numerous old trees were removed, and the church’s electrical system was updated.  The church committee was instrumental in acquiring the church property and its trust fund for the local community.  The Carlisle Presbytery gave ownership of the church and its trust fund to The Friends of the Robert Kennedy Memorial Presbyterian Church on January 4, 2005.  The Friends had the organ rebuilt, new carpet laid in the church, the old kerosene post light restored, the grounds cleaned, and new landscaping installed.

Back to Montgomery Township/Welsh Run