In 1915 stimulated by the fact that a proposed amendment to the Pennsylvania Constitution that was to be voted upon in the November election would permit women to vote in this state, women in Mercersburg  founded a sufragist organization. In March the Mercersburg Journal  reported that the state Senate had passed a bill approving of woman suffrage but that the final decision would be made by the state’s citizens on November 2.  With work by the Woman Suffrage Party, an active political party in Pennsylvania during that year, a great deal of publicity was generated including articles that noted states that had passed woman suffrage and stressed western states that had been the leaders in this movement especially Wyoming Territory that had granted women the right to vote in 1869 before it was admitted into the Union. The publicity also recognized important people who were in favor of woman suffrage and utilized verse. An example of the latter is the following, a parody upon the familiar Comin’ through the Rye.

If lassie wants the ballot

To help to run the town

And a lassie gets the ballot

Many a laddie has the ballot

Not so bright as I

And many a laddie votes his ballot

If a laddie works for wages

Toiling all the day

And her work the laddies’ equals

Give her equal pay….

On Saturday, May 15, of that year a Mrs. Binz from Philadelphia, accompanied by A. B. Hess, superintendent of schools in Chambersburg, Mrs. Hess, and other ladies came to Mercersburg. In Town Hall at eight o’clock in the evening Mrs. Binz  spoke after having been introduced by Mr. Hess who, according to the Mercersburg Journal, made “an impressive address, recommending equal rights for women” and stated that there were many educational advantages “to be derived from woman suffrage.” Mrs. Binz, a graduate of Bryn Mawr College, the local newspaper reported, followed “with a lengthy address, setting forth the many advantages to be derived from the woman’s vote and made an earnest appeal to the voters to support the amendment this fall.”

At the end of the meeting the local group elected Mrs. J. C. Rankin as chair, Mrs. Carrie R. North as vice-chair,  Mrs. H. C. Caldwell as secretary,  Mrs. H. H. Spangler as treasurer, and Mrs. J. A. Philips as literary chair and agreed to meet at the home of Mrs. Rankin on the following Friday afternoon.  Later that fall the local newspaper noted that this group had been busy all summer distributing literature.

On a Wednesday in September of that year Mrs.Binz again spoke at eight o’clock in the evening in the Square to a large group of men and women.   According to the Mercersburg Journal the meeting to be held in the evening had been announced only at noon on that day.  Despite the late notice the band was prepared and played several selections before “The president of the Association brought the speaker of the evening in her handsome automobile into the square.”  Mrs. Carrie North and Dr. James G. Rose, minister of the local Presbyterian Church, accompanied the speaker.  After having been introduced by Dr. Rose, Mrs. Binz spoke for over an hour.  According to the Journal, she was “thoroughly posted on her subject and there was marked interest manifested in her address by the large audience.”  The newspaper opined that judging by the large attendance and “the sentiment now expressed” voters in Mercersburg would approve of the proposed amendment to the Pennsylvania Constitution.

The Pennsylvania Woman Suffrage Association in order to bring the attention of the citizens of Pennsylvania, especially to the men who would do the voting, to this proposed amendment conceived the idea which it carried out of mounting a replica of the Liberty Bell upon a bed of a truck and taking it, along with women speakers, throughout the state. With plans to take this Woman’s Liberty Bell  over five thousand miles to every one of the sixty-seven counties in the state and to visit as many towns as possible the women were active and persevering in  focusing people’s attention upon their cause. The bell was to be a feature attraction in the July 4 celebration in Philadelphia and then be taken in a zig-zag route up and down the state and to end in Philadelphia the night before the election, which would occur on November 2. The bell was to be in travel for twenty-four weeks and was to cover twenty to thirty miles each day.  According to the plans of the Woman Suffrage Party each time the truck with the bell crossed a county line a delegation from the entering county would be on hand to escort the truck and the accompanying speakers to the next town.   In that way, the newspaper stated,”…the trip of the Woman’s Liberty Bell will be one continuous demonstration for suffrage from one end of the State to another.” In addition, the women stated that the clapper of the bell would be chained to the bell and would not be loosened until women received the right to vote. Although some people urged the women to “let their bell boom out its proclamation of political liberty now, just as the old bell did in 1776,” the women declined to do so but insisted that they would ring the bell only when men recognized equality with them, noted that the upcoming election would give “the men of Pennsylvania their first opportunity to grant political freedom to their womenfolk,” and expressed confidence that the men “would grasp it.” 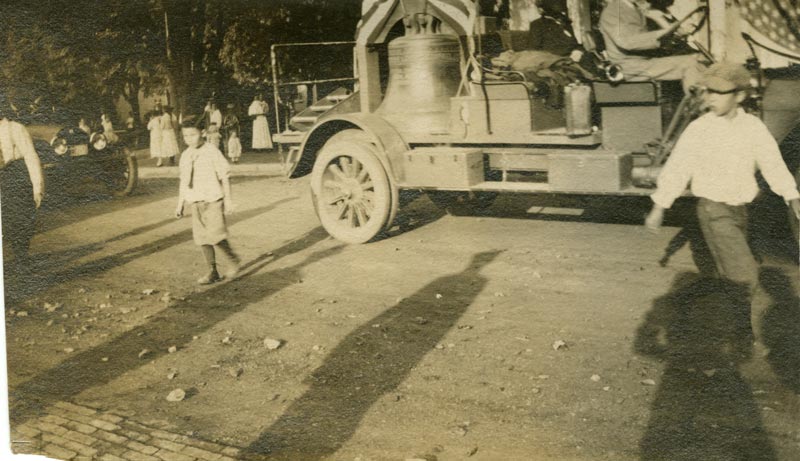 In late September the Mercersburg Journal reported that the woman’s liberty bell would arrive in Mercersburg on Monday, October 4, about three o’clock in the afternoon, that it would remain on the Square for about a half hour, that women speakers would accompany it, and that they would deliver speeches.  The Journal added ”…the women speakers who are accompanying the bell will explain the message and ask the help of the men of the town to unfasten the chains which hold the great brass tongue of the bell silent.  The men’s help is needed because the chains are not to be removed from the bell until the women of Pennsylvania are granted the right to vote.  It is within the men’s power to say just when that day shall be.”  That newspaper article also stated that a Miss Mary E. Bakewell would be the principal speaker and that not one ”of the objections to suffrage has any terrors for her.”  Miss Bakewell of Sewickley, Pennsylvania, was no stranger to Mercersburg as on December 8, 1914, she had spoken about suffrage for women at a meeting of the Woman’s Club, now the Women’s Club, and  evidently during her time here had stayed at Hotel Mercer as the club’s minutes reflect a vote of thanks to Charles McLaughlin, owner of the hotel.

On Monday, October 4, 1915, the woman’s liberty bell came to Mercersburg.  The Mercersburg Journal reported the following:

The bell was late reaching Mercersburg.  The party had been detained at McConnellsburg by Gov. Brumbaugh and his party who were passing over the Lincoln Way.

However, at about four o’clock the party was met out at the pike by representatives of the town in automobiles.  The line was formed at the toll-gate and escorted the bell into town.  The procession was led by Frank Long and Seth Steiger as marshals on horseback, followed by the Mercersburg Band, Burgess Mowery,   members of Town Council, and editor of the Mercersburg Journal in    automobiles.  Mrs. Rankin’s car, handsomely decorated, carried the Local Committee of which Mrs. Rankin is chairman and Rev. H. C. Caldwell.  Several other cars carried citizens of the town and people from the surrounding community.

The circle in the center of the public square was decorated with green vines, flags and yellow flowers and bunting.  It made a pretty appearance.  Dr. Mary Wolfe made two addresses in the square, the first one while waiting for the truck carrying the bell to arrive.  Not in the history of the new square has it at any time been so crowded with people; men, women, and children from town and country were anxious to see the bell and were also attentive to the address.  Dr. Mary M. Wolfe is from Lewisburg and is the finance member of the State Committee of the Pennsylvania Woman Suffrage Association. She is a woman of fine appearance, logical in her addresses and won votes for women here in Mercersburg.  The entire occasion was creditable to the cause - The party was escorted to Greencastle, its next stop, by a number of cars from this place.  Mr. Runk of Chambersburg, in his car, piloted the party here.

In the edition of the Mercersburg Journal  published on October 22 the newspaper reported the following: “By the votes of men Woman Suffrage was defeated in New Jersey on Tuesday of last week.  What will Pennsylvania do on November 2?”

In the week preceding the election at the end of a list of local officers to be elected such as town councilmen, school directors, and constable the Journal  reminded its readers without additional comment, “And don’t forget the vote for women.”  In the issue published on November 5, three days after the election, the newspaper at the end of the list of local election returns noted again without comment “Votes for women 104 for 145 against.”

Unfortunately, women in Pennsylvania, like those in many other states, had to wait until the ratification of the nineteenth amendment in 1920 before they were permitted to vote.  It is interesting to note that locally, when the school board that year wanted local voters to approve of the building of a high school , it appealed to the Woman’s Club for help in persuading people to vote affirmatively.  The result of that November’s election due in part to the women’s vote was the construction in 1921 of a high school at the corner of South Park and West Seminary Streets.

Note:  The Women’s Liberty Bell, which Katherine Wentworth Ruschenberger had cast in New York in 1915 and which was taken throughout Pennsylvania in order to garner support for the passing of a proposed amendment to the Pennsylvania constitution granting women the right to voter, is by a stipulation in Mrs. Ruschenberger’s will now the property of the Washington Memorial Chapel in Valley Forge, Pennsylvania, and is installed in the bell tower of that chapel.

Not until the ratification by 1920 of the nineteenth amendment to the Constitution of the United States by at least three-fourths of the states were women nationwide given the right to vote.  It is true that some states, primarily in the West, had granted women the right to vote earlier.    The first to do so was Wyoming Territory that gave that right in 1869 followed by  Utah, Colorado, and Idaho that had granted woman suffrage by 1890.  Although subsequently a few other states followed, only in 1918 after much pressure from women’s groups did Congress pass what became the nineteenth amendment that became the law of the land only after its ratification by the states.  Therefore, throughout the nation women twenty-one years of age or older could vote in the election in the fall of 1920.