By Calvin and Dakota Bricker 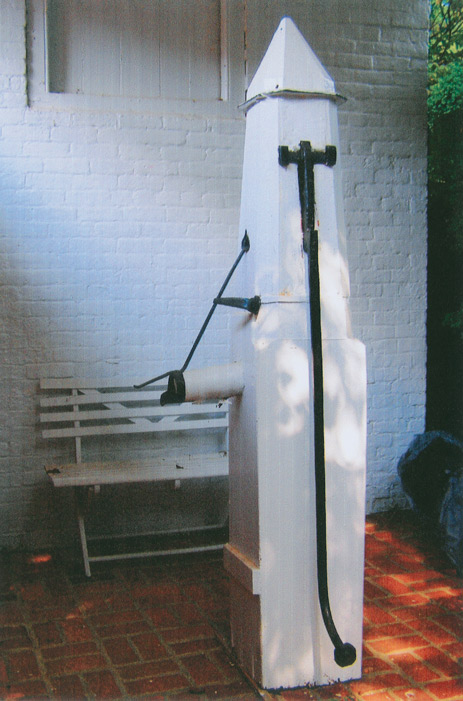 The first settlers established their homesteads next to natural springs and streams for a fresh source of water. Later, as the settlers moved away from the springs and streams, they had to dig wells to get their water. Most wells were 25 to 50 feet deep with some as deep as 100 feet. They were lined with stone walls to prevent the well from caving in. The well was essentially a deep hole in which water naturally seeped in. A bucket tied to a rope was lowered into the well and then brought back up to retrieve water. A lot of hard work! To improve the situation, the first practical hand pump was a tree pump. Tree pumps were usually carved from a large white oak log and were an easier to operate alternative to the bucket. The blacksmiths and carpenters that made these simple engineered devices gave a unique artistic style to them. The pumps usually were given an octagonal shape with a church steeple style cap and a long iron handle and a 10 to 12 inch spout adorned with iron braces. Hundreds of these pumps were used at one time in our local community. Most villages and towns had public pumps which were painted, usually white or red, with a tin cup hanging from the side of the pumps and a watering trough at its base to provide relief to both man and beast. There were two public tree pumps on the square of Mercersburg and one at the corner of East Seminary and Fayette Streets. Senior citizens today probably remember the last of the old tree pumps. Today we only know of two that still exist: a replica of one that was on the square at St. Thomas and the last of the old tree pumps behind the Harriet Lane House in Mercersburg.

Carpenters that made tree pumps had a collection of specialized bits, augers, shafts, and guides to construct the pumps. There were two sections to the pump. The upper stock, which is the pump itself, was made from straight oak, walnut, or chestnut logs that were twelve to sixteen inches in diameter and eight to ten feet in length. The lower sections were wooden conduits that extended to the bottom of the well and were usually made from twelve, sixteen, or twenty feet logs that were about ten inches in diameter. The trees were selected, cut down, debarked, and stored indoors for a year to dry and season before the pump and conduits were carved from them. The logs for the conduits and the upper stock were clamped to trestles. A row of trestles with a guide pipe fastened to them was aligned to the center of one end of the log through which a shaft was inserted and bits were hooked to the end of the shaft. This served as a guide to hand drill a straight hole through the center of the log. The carpenters would bore half way through the long logs and then move the guide to the other end and bore the rest of the way through all by hand! The first bit was a 11/2 to 2 inch auger bit. Then a second bit made a 41/2 inch diameter hole through the logs. A 61/2 inch bit was used to bore a hole through the upper stock of the pump. At one end of each conduit a 61/2 inch diameter hole was drilled one foot deep, and a 61/2 inch flange was carved on the other end to be inserted into the corresponding hole on the opposite end of the connecting conduit and then pinned together. The conduits submerged in water would cause the wood to swell and seal the conduit’s connections. This is how they connected the pieces of wooden conduits together. The bottom conduit was the shortest depending on the depth of the well. A 2 inch hole was bored completely through this log, and this hole was enlarged to 41/2 inches in diameter to within two feet from the bottom of the conduit. This served as a seat for the foot valve to be inserted. The 2 inch hole at the very bottom of the conduit was plugged, and three 2 inch holes were drilled into the side of the conduit about one foot from the bottom. This prevented the pump from sucking up sediment from the bottom of the well.

After boring a 61/2 inch hole through the upper stock of the pump, the carpenters used broad axes to cut the log square and then cut the corners off to make it octagonal. A three inch diameter hole was cut into the side of the log to insert the spout. A slot for the handle was cut near the top of the pump, and a bracket and a bolt were inserted to hold the handle. A cap was carved to cover the top of the pump. After all this is done, the pump and conduits were installed in the well using 25 foot tripods with pulleys and rope. The conduits were lowered in first and pinned together. The upper stock was attached to the conduits and lowered two to three feet into the well leaving six to eight feet extending above the well. Heavy timbers were laid across the well and fastened to the upper stock of the pump to secure and suspend the pump and conduits in place. A platform was then built over the well. Two valves were made from 41/2 inch round, 21/2 to 3 inch thick plugs which had a 21/2 inch hole drilled through the center of them, and a piece of shoe sole leather fastened to one side over the hole to act as a flapper. A U shaped piece of metal was fastened to the sides of the plug. Leather was wrapped around the outside circumference of the wooden plug and greased with tallow to serve as a gasket. They used metal rods with a hook on the end or a rope with a hook and a lead weight to set one of the valves at the bottom of the well just above the three inlet holes. The U shaped metal was used to hook the valve so it can be removed and have the leather replaced every five to eight years. A copper or brass sheet was rolled by hand into 41/2 inch diameter tube, 20 inches long. One end was flared to 61/2 inches. This tube was dropped into the top of the pump and would sit at the bottom of the upper stock where the conduits were attached. This sleeve was where the sucker valve, made similar to the foot valve, would reciprocate. This sleeve and the sucker valve were located in the bottom part of the upper stock, underground to prevent this mechanism from freezing. Then buckets of water were dumped into the top of the pump until water flowed out of the spout. The foot valve held the water in the conduit and pump.

The sucker valve was attached to a metal rod or a wooden shaft and slid down through the top of the pump to the copper sleeve. The leather flap would open and allow the sucker valve to easily slide down through the water. The shaft was then attached to the handle of the pump. When the pump handle was lowered, this raised the closed sucker valve and lifted water up and out of the spout. This action would cause a suction to develop in the conduit, opening the foot valve at the bottom to allow water to flow into the conduit to replace the water that was forced out of the spout. The pump was always primed, and every time you lifted and lowered the handle you received one or two quarts of water depending on the size and design of the pump. Because the pump was made of wood, it was insulated and did not freeze easily. During extreme cold weather, sheaves of wheat or shocks of corn were stacked around the pump to keep the water from freezing. In a worst case scenario, a bucket of hot water could be dumped into the top of the pump to thaw any ice. Since the pump and the conduits are submerged in or filled with water, there was very little drying, cracking, or deterioration of the wood and leather. Tree pumps would last forty to fifty years, mostly rotting where the spout was attached to the pump. The foot valve and sucker valve would have to be replaced about every twenty-five years and the leather attached to the valves every five to eight years.

Trees to make the pumps and conduits were cheap and readily available. There was very little metal used in the construction of the pumps, and local blacksmiths could easily make the metal parts. The long handle with the heavy ball on the end made it easy for children using buckets and small hand wagons to fetch the family's daily water needs or fill the troughs for livestock.

We hope you have a better understanding and appreciation of the tree pump: an amazing, simple, practical, efficient, easy to maintain, cheap to produce device, a marvel of simple engineering and artistic design. As you travel, keep your eyes open, and with a little luck you may catch a glimpse of the last of Ye Ole Tree Pumps.

Information for this article was attained from an article by local historian Murray E. Kauffman titled "Tree Pumps " that was published in Volume XVIII of the Kittochtinny Historical Society

Note: In 1912 the Women's Club of Mercersburg, in keeping with one of its founding purposes, "the promotion of civic improvement," voiced concern about the "sanitary drinking cup" at the town pump on the southwestern corner of the Square and sent a resolution to town council stating that, if the council had the cup removed and the pump cleaned, the Club would pay the cost. The council agreed.

Back to Skills and Early Technology